Reality check on the evolution of RPA as an automation tool

Automation is a key business-IT priority and several technological evolutions are driving a more holistic approach to enterprise implementations. In the first wave of RPA adoption, enterprises were happy to automate back-office processes as a low-hanging opportunity. There was little to no consideration is given to the optimization of processes prior to automation and later on, enterprises realized that as processes change, bots broke and re-scripting took a lot of time and effort. Moreover, RPA bots were frequently used for dumb processing, with no intelligence.

RPA as a technology discipline is evolving to support the automation of increasingly sophisticated processes (not just swivel-chair processes), and along with process discovery/task mining, and artificial intelligence (AI)/machine learning (ML) capabilities, it forms a good combination for end-to-end process automation. An argument in favor of the RPA value proposition is the increasing number of BPM Suite (BPMS) vendors that have partnered with RPA vendors, or even better, have integrated a partner’s RPA product into their own process automation suites. RPA platform vendors have invested in improving key features and capabilities, including user experience (UX), user productivity tools, cloud deployment, component-level APIs, process discovery, process analytics, and AI/ML capabilities for improving the processing of semi-structured and unstructured data.

The below figure from industry analysts at Ovum (now part of Omdia) specifies the evolution of RPA products from basic macros and scripting to what we now classify as “Enterprise RPA”. As depicted in this figure, the real potential of RPA lies in its ability to support more complex processes, which typically would require knowledge workers. This ability to process relatively complex logical rules calls for more sophisticated RPA platforms capable of using AI/ML capabilities to support the decision-making process. 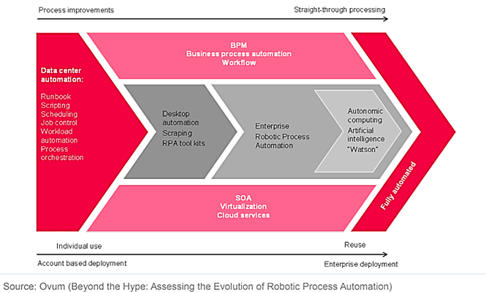 Take a simple example that does not involve AI/ML capabilities, here a combination of an RPA platform and BPMS can significantly accelerate process automation. RPA is a non-invasive approach to automation that does not require changes in legacy IT applications/systems. In terms of using an RPA platform and a BPMS in combination, specific sub-processes (tasks) of an end-to-end process can be automated via software robots, and control can then be passed to the BPMS if there is a need for decision making (case management). The BPMS can provide a connector for integration with an RPA platform, enabling RPA involvement to be triggered from within the BPMS's workflow. Exceptions in the execution of sub-processes via RPA can be handled by the BPMS as an actionable activity. Let us explore this in a practical use case involving the handling of a customer request submitted via email.

What is the scale of enterprise RPA implementations?

Merely judging the scale of RPA implementations by a number of bots in production is a bit moot, as many enterprises can quickly automate say a couple of dozens of back-office processes and those may or may not be of strategic value. A number of bots in production for a long have been the metric that RPA vendors and industry pundits have used in the past, however, this thinking pattern is changing. It is not a secret that several enterprises have purchased much more RPA bot licenses than what they could implement over a two-to-three-year period and there is often a consideration that where are the hundreds of processes that are a good fit for automation using RPA. As per Deloitte’s 5th Annual Global Robotic survey, only 8% of enterprises have scaled beyond 51 bots, with just another 12% having 11-50 bots in production. This does not represent a healthy picture for a software market segment that has attracted billions of dollars in VC funding and frequently cited as the fastest-growing enterprise software market segment. Deloitte’s analysis also reveals that a large number of organizations initiating intelligent automation projects have not calculated the payback period.

Another angle to look at for gauging the scale of RPA implementation is the mix of attended and unattended automation, if an enterprise has a good balance between attended and unattended automation, it is a good indicator of the maturity of RPA implementation at an enterprise level. Such implementations require a good understanding of processes and their prioritization of automation using RPA, while picking up complex processes at the start might not be a good idea, it is equally of not much value to just keep automating a proportion of dozens of back-office processes. RPA in such cases is nothing but an ad hoc automation tool used for basic task automation.

Then there is the proposition of how much straight-through processing can be achieved by using RPA and other automation capabilities (e.g., AI/ML for tackling unstructured data in documents). If an organization can achieve 60-70% STP with accuracy, it is a good sign in terms of the maturity of automation initiatives. A good case in point is that of a US bank, they were looking to digitize 30 million documents and in the process of acquiring six smaller banks. Using a combination of RPA, intelligent document processing (IDP), and AI/ML tools, the bank was able to digitize, index, summarize and classify these millions of documents in about six weeks. This helped reduce Opex by 50%, auto-classification could be achieved with 98% accuracy. There is a clear business impact of automation in this case and such types of complex use cases cannot be handled using piecemeal approaches to automation.