Benefits of the Angular framework for Your Apps

Angular is the most popular & modern platform for web development and is actively being used by large companies including the company that created it, which is Google. Businesses are actively embracing it as their front-end development technology given the benefits it offers. In a bid to help you pick Angular under all the right settings and business requirements, we discuss in this blog the key advantages of deploying it as a web developer's technology. 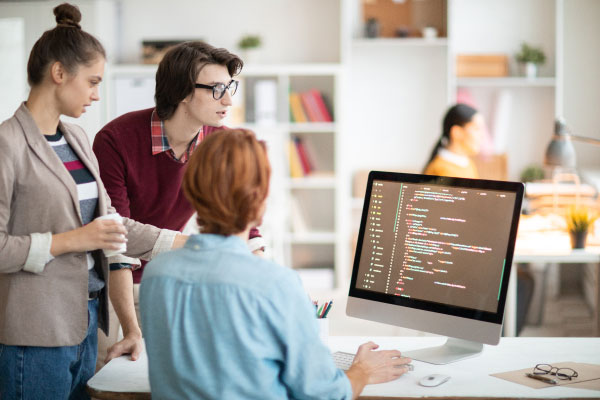 Angular commonly known as ‘Angular 2+’ and is a free and accessible web development framework that is designed in JavaScript. Angular is open-source, meaning the source code is freely available to anyone.

Angular is made to create single-page apps for both desktops as well as mobile apps and is built on Typescript and HTML. It has a number of features that enable developers to create sophisticated mobile and web apps that can offer amazing user experiences.

Why must you choose Angular for your app?

Now that you have a better understanding of what the Angular framework is, here are the main reasons why you should consider choosing it for your next web development project.

One primary advantage of using Angular for your business is that it enables developers to build interactive, engaging, and attractive UIs. It immensely contributes to a seamless user experience by expediting the speed of loading apps and ensuring the most optimal performance.

Moreover, Angular makes use of a declarative UI which means that it makes use of HTML and not JavaScript to outline the UI. It enables developers to build UIs that are complicated, interactive, dynamic, and highly personalized.

Angular organizes the error code in groups which are known as ‘modules.’ Besides making it simpler for developers to split up, organize and reuse the code snippets, modules positively affect the performance of the app. These instances lead to a simpler, faster, hassle-free app journey for the users.

Angular is popular amongst technology developers because it enables them to effectively code as individuals as well as in a team across an organization. Angular works well across almost every platform including mobile, web, native, and desktop, this means that developers can cut down on development time by code reuse and related skills. For instance, if there is a need for a native version of the app for the desktop or web app, the developers need not re-create things from ground up.

Angular also has room for modularity that can expedite the development and offer more bandwidth to developers to write cleaner and shorter codes. Modules imply that your tasks can be split amongst different members of a team while making sure that the order of the code remains unchanged. Each member of the team can work on certain modules simultaneously – enabling them to enhance the delivery time as well as productivity. The system makes it easy to test snippets of code separately without interfering with the entire codebase. This feature also makes sure that the development time gets reduced preventing additional and hidden costs related to added labour and time.

Angular uses TypeScript as its fundamental development language. The primary benefit of Angular is, that it enables static typing that helps improve the quality, readability, and consistency of the written code. Static typing implies that just the data that compares with the predefined format and type will be compatible. This feature enables developers to enhance the development process by easy error spotting and reducing the instances of rewriting the code as needed through the development process.

Backed by the creator

Angular is built and maintained by Google, which means it keeps rolling out regular updates, functionality upgrades, and end-to-end support. Besides, Google makes use of Angular for its in-house user-facing applications as well as websites such as Google Cloud, AdWords, Google Gmail, and a number of its tools used internally. Some more popular apps are built on Angular such as Youtube, Forbes, Upwork, IBM, Microsoft Office Home, etc.

If you’re looking to create intuitive websites or applications quickly and cost-effectively, then Angular may be the framework for you. If you’ve decided to choose Angular for your next project, the next step is finding the perfect Angular App development services company. So begin your journey today by writing to us.