Native app development has long demonstrated its potential in the industry, yet there are hybrid development frameworks that sometimes score over and above the native app development. Multi-platform app development is one such similar concept that is based on the notion that android and iOS, besides working on two strikingly different devices, have a common architecture. The business logic behind the apps is probably pretty much the same and includes downloading files, reading from and writing to a database, getting and sending data to a remote host, parsing the remote data, etc. Moreover, UI components also have similar code and can be reused on development for various platforms. 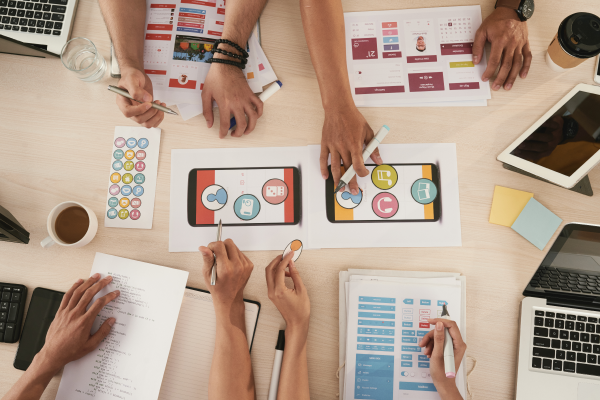 Multi Platform app development is based on this idea that involves writing the business logic once and sharing it between different platforms. In this blog, we will talk about how getting a multiplatform app developed is a breeze with “Kotlin Multiplatform Mobile (KMM)”, and what advantages do enterprises get by opting for it.

Kotlin Multiplatform Mobile is an SDK for cross-platform mobile development that allows us to use the same business logic code in both iOS and Android applications. It was developed by JetBrains. To make this possible, KMM uses a mobile-specific structure of Kotlin Multi Platform projects which uses various tools and features which make the building of the mobile app efficient.

Here are some important highlights of KMM:

How does KMM work?

An app consists of 4 main layers that includes UI logic layer, presentation logic layer, business logic layer, and data Layer. The data layer which has classes with the responsibility of making network calls and database queries can be 100% shared. The presentation and UI logic can be partially shared depending upon the device types and other platform specific peculiarities.

KMM can seamlessly be integrated with the mobile project. Shared code, written in Kotlin, is compiled to JVM bytecode with Kotlin/JVM and to native binaries with Kotlin/Native, so you can use your KMM business-logic modules just like any other regular mobile library.

Where does KMM fit in?

KMM comes in when benefits of both cross platform UI or native apps run out. No matter what, native app development will always lead to excessive costs linked with separate teams working  on separate code bases, whereas cross platform UI will always struggle to create a reliable and best performing app. While KMM allows for a significant sharing flexibility in code, the choice of what to share rests with the team. Developers can choose to share small bytes of logic to whole layers of an app. Although, the code for UI and other device capabilities remains fully native.

Why may KMM succeed?

As attractive as the framework may sound, KMM needs a longer project setup, extensive iOS testing, and a cross-functional team to succeed. You need the right guidance and a development partner to make the most of the framework. A number of companies are already using it, including VMWare, Autodesk, and Yandex. Based on specific app development needs, KMM can help enterprises channel the best features of native and cross platform development without compromising on costs or quality. To get the best outcomes, get in touch with a KMM development company.